← more from
Mint Records
Get fresh music recommendations delivered to your inbox every Friday.
We've updated our Terms of Use. You can review the changes here. 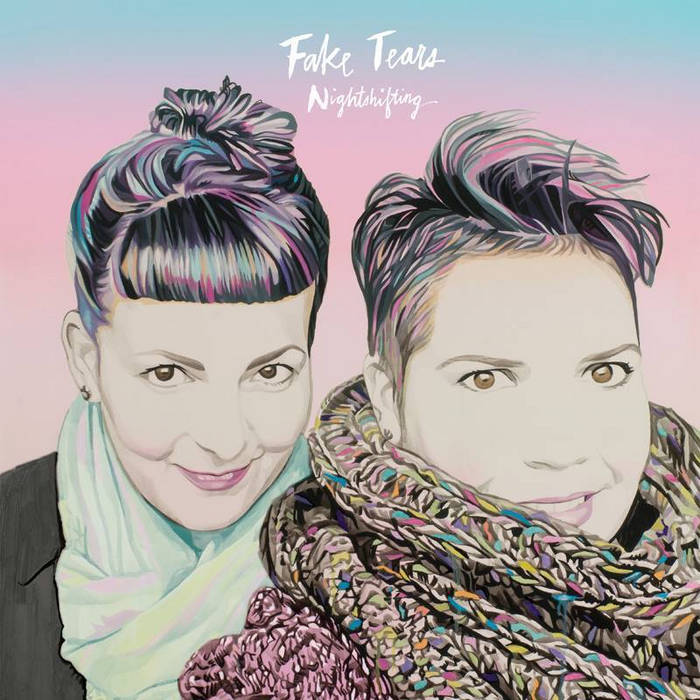 "The voices of the two Vancouver women blend together so well that they seem like a single instrument of ethereal beauty. [...] There is something ineffably nocturnal about a song like “You Want the Light”, with its twilight shimmer of oscillating synthesizer tones and dreamily contemplative vocal harmony. And when Fake Tears kicks up the tempo, as on “Second Wind”, it makes a perfect dancing-with-tears-in-my-eyes soundtrack."

"[Nightshifting] is a late night walk down a dark, foggy alley. Hazy layers of lo-fi keys are custom fitted with electro-noir beats, buoyed by the pair of singers’ disarming harmonies. In an age where ’80s electronica and synth-pop are the trend du jour, Nightshifting recalls those old movie soundtracks, with hints of Vangelis and Cocteau Twins in the mix.

"The soundtrack of the city at night is dark and pulsing, as Fake Tears demonstrates on their debut album, Nightshifting. [T]he pair has created an atmospheric odyssey through the night that is both brooding and oddly optimistic.
Ethereal synth swells and drum machines are layered with shimmering harmonies to other-worldly effect, proudly influenced by synthpop pioneers like Kate Bush and New Order.
The album opens with “You Want The Light”, a melancholy incantation that sees the sun set on the city and darkness descend. “Second Wind” evokes Bronski Beat as it asks “Do you want me? Do you care?” Such are the questions that haunt us on lonely, sleepless nights.
But while the night may be full of terrors, Fake Tears urges us onwards through the darkness, for morning is soon to come."

"It’s tricky not to fall in love with their quirky synth-pop. There’s a definite femme fetale feel to Fake Tears: charming and sexy, but simultaneously haunting. You can’t help but be a little wary of the girls – after all, if their songwriting abilities are anything to go by, they’re bloody powerful."

Bandcamp Daily  your guide to the world of Bandcamp

Sampa The Great joins the show to discuss her release, "As Above, So Below".